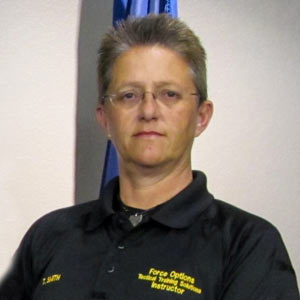 Deputy Tracy Smith is an experienced Law Enforcement Officer with over a decade and a half of active law-enforcement experience. She began her career in law enforcement in 1992 at a small agency in central Florida after graduating her academy with a distinguished service award. In 1996 she joined the Village of Royal Palm Beach Police Department where she was a department instructor in several high liability areas, including Advanced Expandable Baton, Handcuffing, Defensive Tactics, and Use of Force. In 2006 the Village of Royal Palm Beach Police Department merged with the Palm Beach County Sheriffs Office. During her tenure with both agencies, Deputy Smith has spent several years assigned to the Palm Beach County Sheriffs Office Organized Crime Bureau Task Force as well as the US DEA Task Force. She joined Force Options USA as an instructor in 2005 after completing the Defensive Tactics Instructor Course. She has completed the requirements and now holds the position of Master Defensive Tactics Instructor Trainer. Tracy is a vital member of our team and brings a solid skill set to the table. Tracys instructor certifications include:

Ms. Smith brings a solid background of policing skills and experience to the Force Options Team.